Stage from Comillas to Colombres

After the visit to Santander and then to Santillana del Mar and Comillas, surely the pilgrim will appreciate concluding the stage today in a quiet town, which allows us to relax without the pressure of having a huge list of places to visit.

Today we will say goodbye to Cantabria to enter Asturias, the cradle of cider. Today, we will move along the edge of the Cantabrian Sea and many of its estuaries. An environment that will give us a dreamy landscape and interesting geological formations.

On this journey, we face a distance of 29 kilometres. The terrain on this section is a little more complicated than that of the previous stages because although the slopes are not excessive, they do have a greater presence. 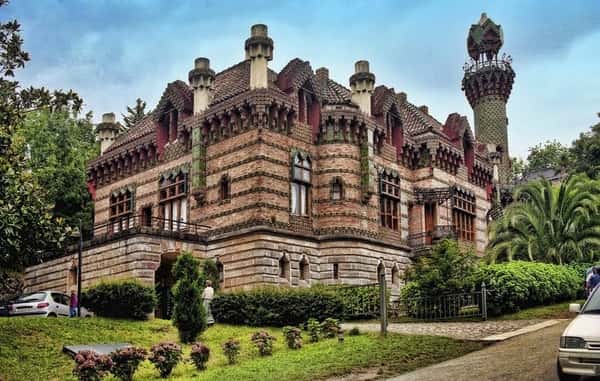 Practical tips for this section: In this section, you will pass through the Oyambre Natural Park, enjoy its beautiful landscape. Buen Camino!

We leave Comillas, leaving the Palace of Sobrellano on our left, by Calle Marqués de Comillas. We cross a roundabout and continue straight on the CA-131 road, which has a lane for both pedestrians and cyclists.

By the same road, we cross the La Rabia estuary and then turn right to enter Oyambre Natural Park (km. 4,8).

After the ford, we turn to the left, on a steep ascent, by a paved track that leads to the road. We follow it on the left and reach the Church of Santa María del Tejo.

We exit onto the CA-363 road and we enter through it to the centre of El Tejo. We continue down to the Santa Marina golf course, cross inside the complex and cross the bridge over Captain’s creek.

Next, we pass next to a small chapel and at last, we leave the sports facility by a paved track. Along this, we ascend to the Church of San Pedro, which welcomes La Revilla, a town in the municipality of San Vicente de la Barquera.

Following the path, we soon see the Puente de la Maza, through which you access the town of San Vicente de la Barquera (km. 11.6). 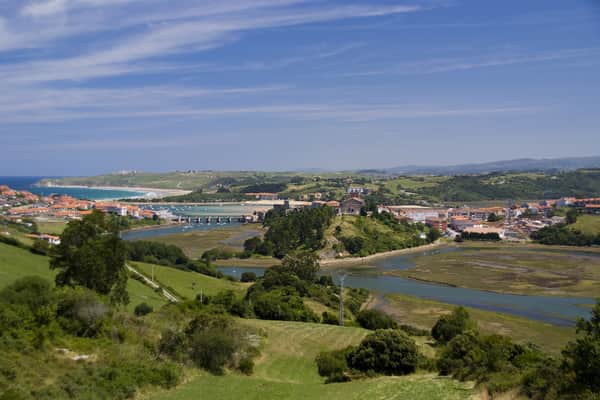 Practical tips for this section: In Hortigal, we find the first detour from the Camino Lebaniego, which goes to the Monastery of Santo Toribio de Liébana. Past Serdio we find a second detour, which is now part of the official itinerary. Buen Camino!

By a paved track, which is the extension of the Camino de las Calzadas, we arrive at the village of La Acebosa (km. 14,1). From this small village, we have a section in an ascent that detours and descends to the CA-843 road, which heads to Pesués. Following this route, we pass through El Hortigal (km. 16.9), on the banks of the River Gandarilla.

At the village exit, we take at a junction the detour on the left. We descend into the valley of the River Nansa, leaving a quarry on the right-hand side. Below we go onto the CA-181 road, which passes 400 metres from Muñorrodero.

The pilgrim path continues to the right, passing under the railway line and crossing the bridge of the Tina Menor estuary, at the mouth of the River Nansa.

After crossing the estuary, we take a track on the left. Before reaching the N-634 road, we turn left again on a track that first goes up and then down to Pesués (km. 24.4). 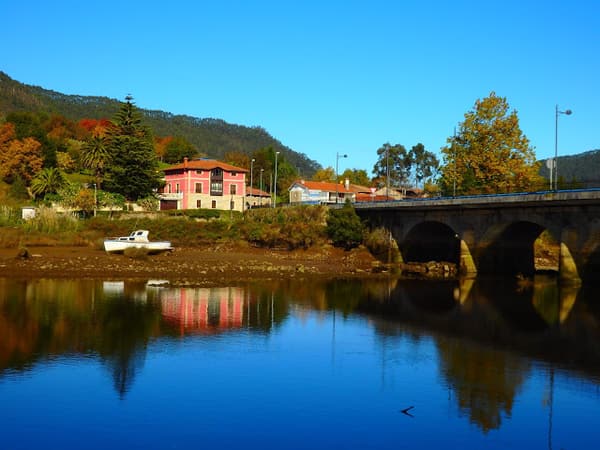 Practical tips for this section: It is possible that if it has rained, you will find the path that runs along the wooded section muddy. If so, pay attention to your steps to avoid slipping over. Buen Camino!

We leave the centre by a path, ascending, which leads us to a forested path that starts on our left. After a steep descent, we arrive at Unquera (km. 27), where it's worth stopping to eat one of its famous "Corbatas".

In the town, we continue along Paseo Juncal, until the end, where we cross the bridge that crosses the River Deva and that separates the Autonomous Community of Cantabria from that of Asturias.

We cross the bridge, enter Asturias, and continue along a narrow paved street that runs uphill, where we enjoy interesting views. By Calle Lamadrid, we arrive at the centre of Colombres, our destination today. 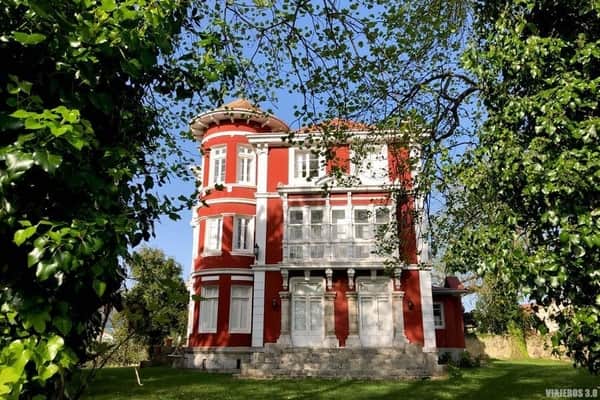 Practical tips for this section: Although Colombres is known for its Indian houses, it will be enough to take a short walk through the centre to visit the town. Finally, an afternoon to relax! See you tomorrow!

The town of Colombres is characterized by the presence of Indian houses, in fact, in one of them is the headquarters of the Museo de la Emigración in the town. You may also find it pleasant to walk along Playa de la Franca.

Here are some tips for today's stage and we also suggest some dishes to say goodbye to Cantabria and start enjoying the gastronomy of Asturias, capital of cider and fabada.

On this stage you will advance for a few kilometres along the national road, which carries a high level of traffic, so you should take great precaution and avoid passing aong it in low light.

Moreover, the stage does not imply any added difficulty for cyclists or people with reduced mobility, beyond a greater presence of slopes than in previous stages.

Today you can enjoy the following regional dishes.

What to do Comillas - Colombres

Here's some information on a variety of places that will come your way during today's stage. 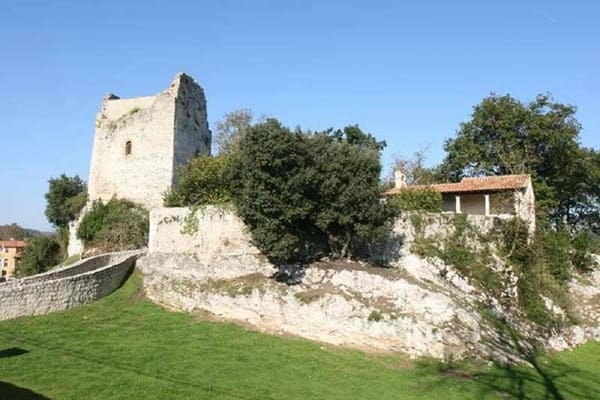 Torre de Estrada is located in the municipality of Val de San Vicente, specifically in the parish of Estrada. The construction was declared a Site of Cultural Interest because it is the only fortification of the province that houses a hermitage within the same enclosure.

The tower is divided into three floors, which rise on a square floor. Today, inside it houses a museum space dedicated to the Maquis family, recognized in Cantabria and Asturias for fighting during the Spanish Civil War against Francoism.

Santuario de la Barquera is located on a small mound near the fishing port in the village of San Vicente de la Barquera. The construction of the temple dates back to the 15th century.

The site of the construction was carried out in the place, where according to tradition, a boat without oars appeared, sails or crew, carrying a carving of the Virgin of Barquera.

It was this fact that led the locals in the town to want to build a temple that could shelter and where the virgin could be venerated.

The temple consists of a single nave divided into two sections by half-point arches, on which rise cross vaults. From its exterior stands the main facade that has a portico formed by pillars, half-point arches and buttresses.

The Palacio del Corro is located in the heart of San Vicente de la Barquera and is now the headquarters of the City Council.

The building dates from the 16th century and its construction was carried out by order of Antonio del Corro to welcome the sick and poor of the town. Its structure stands out its façade with a central balcony, surrounded by the shields of the Corro family. 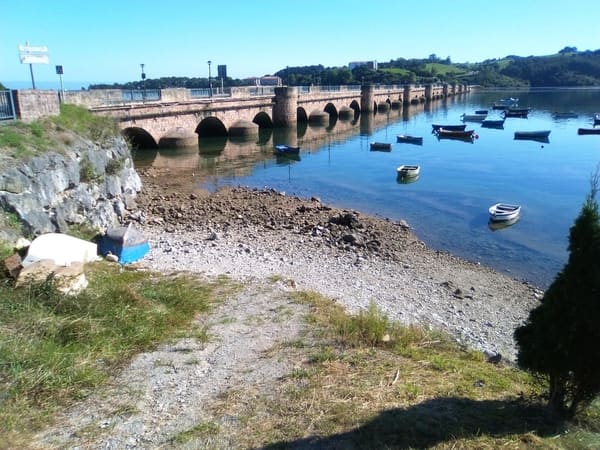 The Puente de la Maza crosses the estuary of San Vicente de la Barquera. Its construction was carried out in the 15th century, by order of the Catholic Monarchs. Its structure consists of a set of 28 spans that, although renovated, retain their medieval appearance.

The construction has, in pieces, vestiges of the old wall that crossed an earlier bridge built in wood during the 6th century.

The Church of Santa Maria de los Angeles is located on a small mound, next to the castle of San Vicente de la Barquera, and can be seen from any point of the town. The temple has a lot of Gothic elements.

Its construction dates back to the 13th century, although it has undergone various renovations which, over time, various structures have been added, such as the side chapels, the sacristy, the outer tower, etc. that are after the 15th century or the bell tower that was erected in the 19th century. In 1931, the church was declared a Property of Cultural Interest.

Currently, the church consists of three naves, which can be accessed by three different doors, that stand out for their ornamentation based on Gothic and Romanesque elements. The naves are covered by cross vaults.

Presiding over the complex is the chancel, which is composed of three rectangular apses, where each corresponds to a nave.

The central apse houses the main altarpiece, in Baroque style, by Pedro de la Puente Tolnado and Simón de Haro, in which a beautiful carving of the Virgin Saint Mary of the Angels is preserved.

Admission: General (1.50€) with the possibility of guided tours

The Convent of Luís is located on the outskirts of the town of San Vicente de la Barquera. Its construction dates back to the 15th century. It was originally managed by the Friars and revered San Luis. Some side walls, apses and arches are preserved from the original construction.

Guided tours: It is possible to take guided tours by appointment in the months of April to October. 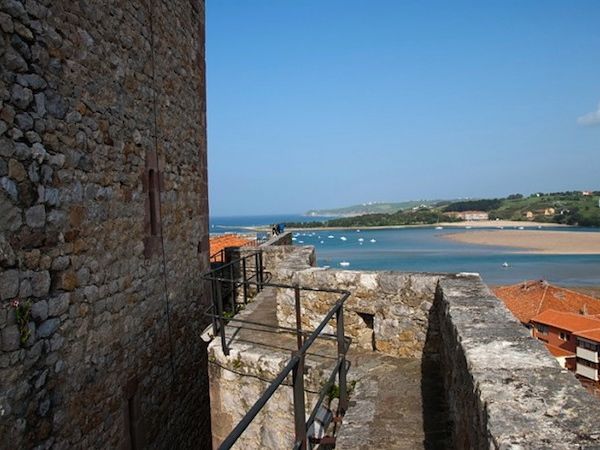 The Castillo del Rey San Vicente de la Barquera is located at the top of the town. Its construction was carried out in 1210, although it is believed that its original construction had already begun in the late Middle Ages. In 1985, it was declared a building of Cultural Interest.

Its structure has an elongated shape and is made entirely of masonry, except the corners and openings, for which, stone was used. The building has two high towers located on the sides.

One of them is square and the other pentagonal, being connected to one other by a central body.

The interior of the castle has hosted a number of exhibitions about the town for many years.

Colombres is a town of just over 1,300 inhabitants, in the municipality of Ribadedeva. It is the first town in Asturias, following the Camino del Norte towards Santiago de Compostela.

In the 1950s the village was very prosperous and attracted many migrants, so it has a wide range of facilities such as schools, a spa, a nursing home, etc.

In 2015, the town was declared as an Exemplary Village of Asturias, for its history and heritage, in which the Indian houses stand out. In the town, you can visit the Museo de la Emigración to get to know in detail the past of the town and the Playa de la Franca. 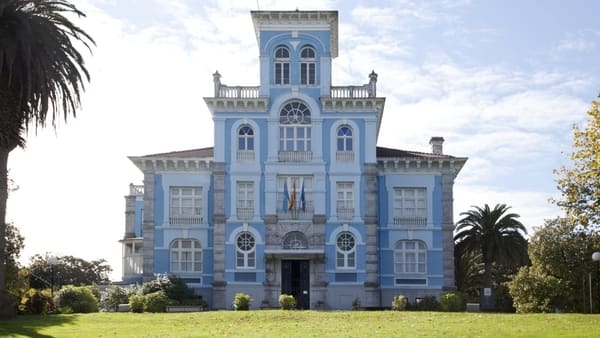 The Emigration Museum, or Indian Archive Foundation, is located within the Quinta Guadalupe de Colombres. The building is a house built in 1906 by Iñigo Noriega Laso in homage to his wife Guadalupe Castro.

After the owner's death, the house was intended as a rest home and military hospital, but a few years later it was acquired by the state and from 1987 it began to be used as the headquarters of the Indian Foundation Archive.

The Museum will allow you to know the structure of the old Indian houses and the details related to emigration to the Americas.

Playa de la Franca is located on the outskirts of Colombres. The beach is approximately 260 metres long and is characterized by its fine white sand. The space has various services such as parking, lifeguard post, showers, etc.

Services stage from Comillas to Colombres

Map stage from Comillas to Colombres

Profile stage from Comillas to Colombres