Stage from Gernika to Lezama

After yesterday’s stage, a little smoother than the previous ones, we will find more energy to cope with the day ahead.

On this stage, we say goodbye to the rural landscape and prepare to enter Bilbao, tomorrow. Through mid-mountain trails, walking alongside strong streams, we will cross the Urdaibai Biosphere Reserve.

After Eskerika, we will join the asphalt, leaving the ancient route, to go down to the Asúa Valley. We finish the stage in Lezama, where we will still find some green areas with the first shades of industrial grey.

The sixth stage of the Camino del Norte will provide mountain ranges again, with frequent ascents and descents. However, the short route will make completing the day no so difficult. 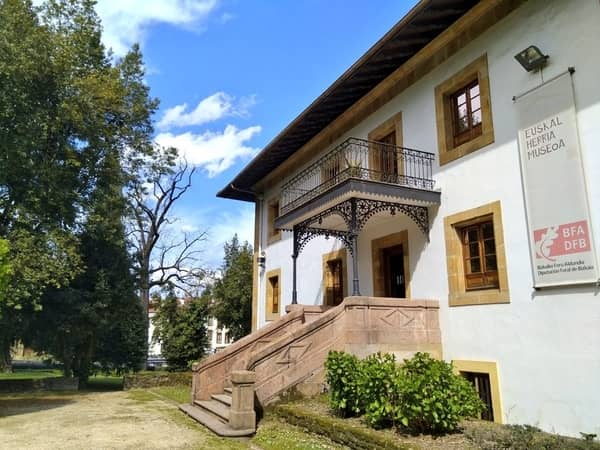 Practical tips for this section: Depending on where you stayed the night before, you can join the route without having to go back on your steps. The Casa de Juntas and the famous Gernika Tree are a good reference point for starting the stage.

Given the lack of services on the first stages of the stage, make sure you have water and something to snack on for the first kilometres. Buen Camino!

We start the morning going towards San Bartolomé street, through which we cross the river and the railway line. 150 metres later, we then we turn left on Calle 8 de Enero and turn onto Calle Artekale, the second side street, on the right-hand side. We pass by the Tourist Office and enter the Plaza de Foru, where the Town Hall is located.

We then go around the architectural site and turn left to follow the Calle Zearreta and Calle Mestikabaso. At the end, we turn right and we arrive at the Chapel of Santa Lucía, in the district of Zallo (km. 2.2).

By an asphalted track and by a forest road after, we begin the ascent of 260 metres to the Bilikario Mountain. On the ascent, we will only have to take a detour to the left, well signposted, in Gerekiz (km. 5.2). Then we cross a gate and descend through some hamlets in the district of Pozueta, in the municipality of Muxika. 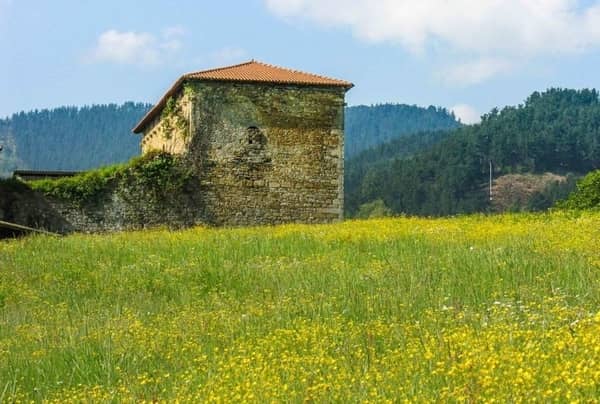 Practical tips for this section: Cyclists are advised to follow the road route at the detour located next to the hamlet of Landotz. Buen Camino!

A stretch of asphalt leads us next to a farm where donkeys roam and the pilgrim route enters the municipality of Morga. Below we avoid the BI-2121 road by an underpass and exit the road leading to Eskerika. At the entrance, we find the Chapel of San Esteban de Gerekiz (km. 7.9).

Continue along the road to the hamlet of Landotz, where we turn right to take a forest track, which goes down and then up, to return onto the road. We continue to the right, sheltered by some eucalyptus, and we border the hamlet of Pepiena (km. 10.3).

Following several tracks, we return to the asphalt, this time the hard shoulder of the BI-2713 road (km 13), we follow it and descend, on the left, to Goikoelexalde and Larrabetzu. 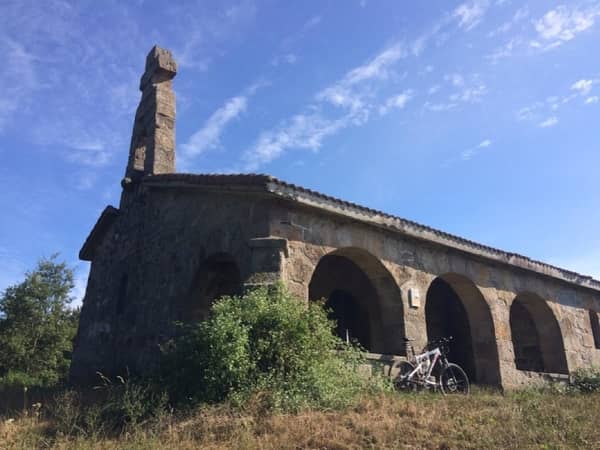 Practical tips for this section: Goikoelexalde is the first place with a bar along the stage. Buen Camino!

In the district of Astoreka (km 15), from Larrabetzu, we leave the road on the left, following a narrow path that becomes a track. We pass by the small Luciaren Etxea farm and at the Zugasti stream, we arrive at Goikoelexalde, where we are welcomed by the Church of San Emeterio and San Celedonio (km 17.1).

Follow the BI-2713 road until Larrabetzu (km. 18.5). In this locality, we find the Church of Santa Maria, but the pilgrim path does not reach it, so to visit it, you must make a diversion.

The Camino de Santiago deviates to the right, following the section of road to today's destination, Lezama. This last stretch is lacking shade that, in summer, can be quite hard.

Practical tips for this section: in Lezama, you will find some places that you can visit during the afternoon or at the exit of the locality for tomorrow's stage. See you tomorrow!

In Lezama, you can take advantage of the afternoon to rest and arrive, and then, tomorrow, go to Bilbao full of energy. In the town, you will find places of interest such as the Town Hall, the Chapel of San Antolín, the Humilladero del Santo Cristo, the Church of Santa María or the Torre de Lezama.

However, if you prefer, tomorrow when you leave the town you will pass by the Church of Santa Maria, the Torre de Lezama and the Humilladero del Cristo, so you can make the visit in the morning and take advantage of the afternoon in order to relax.

Here are some suggestions for the sixth stage of the Camino del Norte. Don’t forget to consult them before starting the tour!

Today's stage presents us with an environment surrounded by lush vegetation, but in return, we are forced to suffer continuous climbs that allow us to border the Urdaibai Biosphere Reserve.

The good news is that we will face the hardest stretch during the first kilometres of the day: The ascent to the Bikikario Mountain. On this ascent, we reach 260 metres of elevation, but at a leisurely pace, it is a challenge perfectly achievable by pilgrims in any physical state.

On the other hand, the pilgrim must bear in mind that on today's stage you will find few services during the day, so it is advisable to bring water and something to snack on for the first kilometres of the stage.

Pilgrims who make their way by bicycle must continue along the road, at the detour that you will find next to the hamlet of Landotz, after the Chapel of San Esteban de Gerikiz.

On today's route, you can taste some of the regional dishes that we propose below.

What to do Gernika - Lezama

Throughout the day, various points of interest will come your way. Below you will find information about each one of them to enjoy the visit.

The Chapel of San Esteban is located at the top of Gerekiz. The temple is considered one of the oldest in the Biscay province by the two replicas of late-roman gravestones it houses. Nowadays, these are guarded in the Archaeological Museum of Biscay. 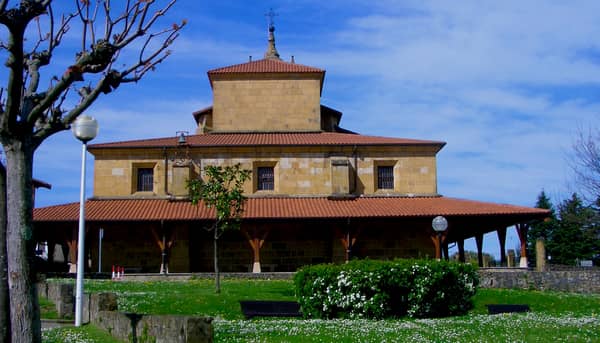 The town of Lezama, formerly Santa Maria de Lezama, is located in the great region of Bilbao, province of Vizcaya and has almost 2,500 inhabitants. The locality is well known by the followers of Athletic Bilbao, as in the municipality, the training facilities of the football club can be found.

Much of the historical architecture of the locality is strongly related to the medieval manors, some of the places of interest are the Town Hall, the Chapel of San Antolín, Humilladero del Santo Cristo, Church of Santa Maria or the Torre de Lezama.

The Lezama Town Hall is located in a modern building with classicist elements, built in the middle of the 20th century. The building is made up of three floors. On the first, there are three half-point arches, in the second protrudes the balcony that extends under three large windows and on the top floor are located three smaller windows. 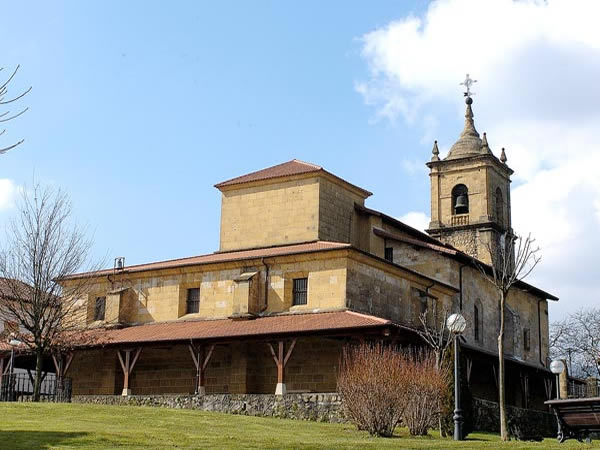 The Church of Santa Maria de Lezama dates from the 16th century and is Gothic in style. The interior of the temple is divided into three naves covered by vaults, topped with five altars and a high chancel.

A gilded Baroque altarpiece stands out in the interior, composed of three parts. The central part houses the image of the Assumption of Mary and on the sides are images of Saint Peter and Saint Paul.

The small Chapel of San Antolín is located in the town of Lezama. There is no documentation to give its year of construction, but it is estimated that it was erected several centuries before the renovation that was made in the 18th century, in which its roof was rebuilt.

The image of San Roque of the 18th century is the most impressive part of the interior.

The Shrine of Christ the Saint is located in the district of Aretxalde, Lezama, and is one of the most unique wayside shrines of the Baroque period. The date of construction is not exactly known, but there are documents attesting to its existence in the mid-16th century.

On its façade is an enormous half-point access arch, preceded by a portico resting on three Tuscan columns. The temple has a cross-plant and consists of a single nave, transept and straight chancel. 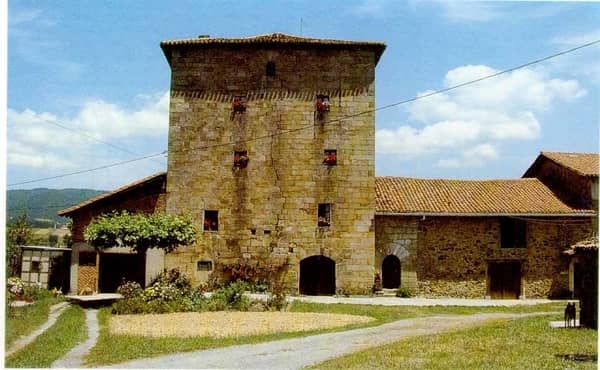 The Lezama Tower dates from the 16th century. Its construction was carried out with the aim of protecting and defending the locality, so it presents an aspect of military fortification.

Its structure, of square floor and covered by a gabled roof, is divided into three levels by which they are accessed by a wooden staircase.

Services stage from Gernika to Lezama 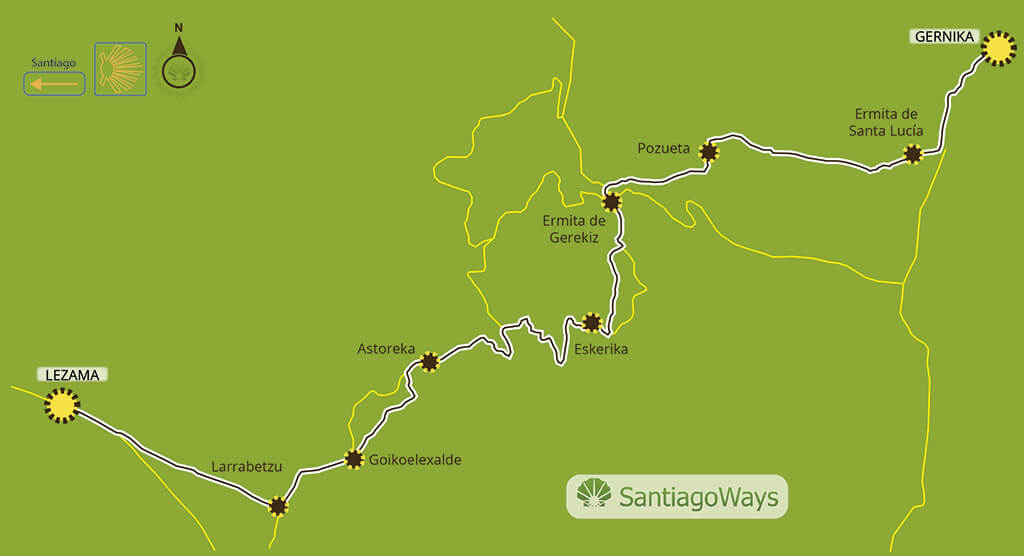 Map stage from Gernika to Lezama

Profile stage from Gernika to Lezama