The Camino del Norte continues to give us quiet stages and today gives us a short route during which our legs will eventually relax completely.

The short distance on this stage will allow us to stop to appreciate the various places of interest that although they demand a detour on our part, are worthwhile, such as the beautiful streets around the Cudillero Ampitheatre, or Selgas Palace, in Pito. The stage concludes in Soto de Luiña, a classic stage finish.

Today we face an easy stage, with a short distance (15.3 kilometres) and with frequent but moderate slopes. 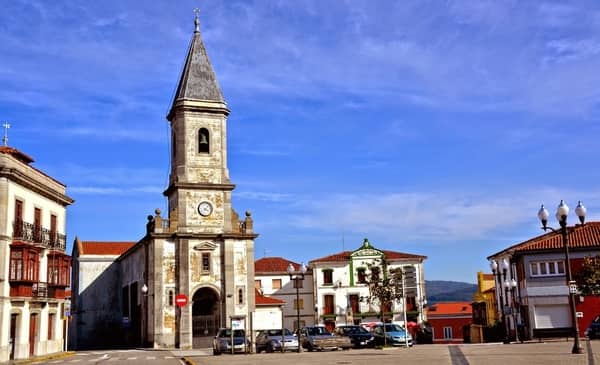 Practical tips for this section: The Jacobean path does not pass through the picturesque town of Cudillero, located 1.8 km from El Pito.

If you want to visit it you can make a detour, with the increased distance that this implies, but with the short distance on today’s stage, you can permit yourself. Buen Camino!

From the central square of Muros de Nalón, where the Town Hall and its church are located, we take the street towards the granary that houses the Tourist Office. After crossing the FEVE railway, we turn right on Calle Francisco Cabal, 100 metres later, turn left.

Later, we cross the FEVE tracks again and enter a forest, along a dirt track. We descend in zigzag to cross a stream and soon after we find the way back to the FEVE.

We cross it through a tunnel and exit onto a local road, which we continue to the right. This leads us to the CU-2 road, already in El Pito, a small town in the council of Cudillero (km. 4).

We continue along the CU-2 road, towards Cudillero, passing by the Palacio de Selgas and the Church of Jesús de Nazareno. Next to a modern building, we leave the road and take an asphalt track, on the left, which then turns into a path on which we cross two streams.

In the end, we end up moving onto the access road to the FEVE station in Cudillero, which we leave on the left, crossing the FEVE railway, through an underpass. 400 metres later, we turn right.

In the hamlet of El Peñedo we cross the national N-632 road and then pass under the A-8 motorway. We follow the paved road, first uphill and then downhill, to pass again under the highway and reach the village of Rellayo (km. 8,6).

Practical tips for this section: This section was affected by the works on the A-8 motorway, which required some rodeo. Luckily enough, the route already seems to be re-established. Buen Camino!

At the exit of the town, we follow a dirt track that passes twice under a viaduct of the A-8 motorway. Then we cross the N-632 road and, in La Magdalena, we go down to La Concha de Artedo Beach. We continue for 400 metres along the sand and leave it on the right-hand side.

The pilgrim path continues along the opposite side, uphill, towards two grandiose viaducts, one from the national road and the other from the motorway. After crossing them, following a dirt track, we reach the small hamlet of Mumayor (km. 12.4).

We cross the village, and at the exit we turn right, on an uphill road. We follow its path for 250 metres and then deviate to the left on a pleasant grassy path that crosses a thick forest. We flow into the national road and follow it to our destination today, Soto de Luiña (km. 15,3). 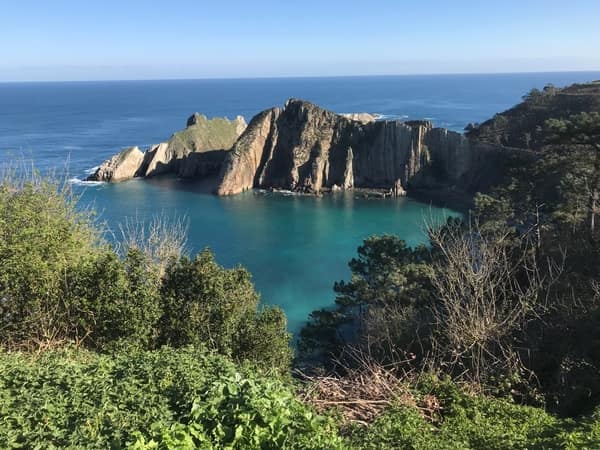 Practical tips for this section: If it is hot and you want to bathe in the sea, 2.2 kilometres down the local road, you will reach the pleasant San Pedro Beach. See you tomorrow!

We've got another quiet afternoon ahead of us today. The town offers services but not too many attractions. After the visit to the Molino de Goro and the Church of Santa Maria, you have two options.

Sit peacefully in front of a café to enjoy the good conversation or walk 2.2 kilometres to the beautiful beach in San Pedro and enjoy the sea.

Here are some recommendations for today's stage.

Today's stage is simple and over a short distance. It's not a difficult one.

During today's stage you will be able to taste the following dishes.

What to do Muros de Nalón - Soto de Luiña

Here's some information on places of interest you'll find on today's tour. 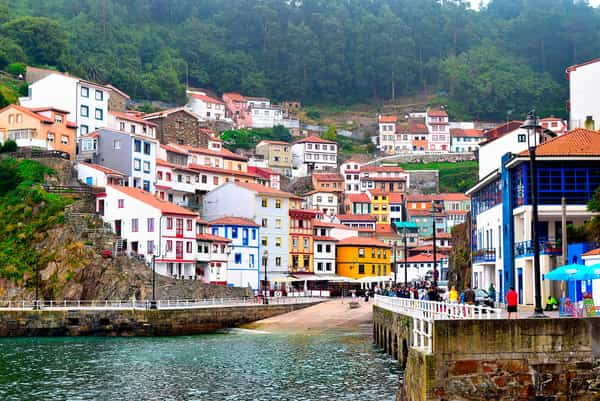 The town of Cudillero has an old town distributed in the form of an amphitheatre, which has been classified as an artistic historical site. The houses are placed overlapping, taking advantage of every corner of the hill and distributed as concentric arches.

The villa culminates in the Plaza de la Marina, which is the main stage of this peculiar amphitheatre.

Cape Vidio, in Cudillero, is one of the most important capes in Asturias. From it you can see Estaca de Bares and Cabo Peñas.

On the cape you can see its cliffs, about 80 metres above sea level, the lighthouse and a cave formed worn by the tidal swell that can be visited at low tide, known as the Iglesiona.

The cape is composed of quartzite and slates and around it you can observe different seabirds, such as the cormorant and seagulls.

The Humilladero Chapel is located in Cudillero and dates back to the 13th century. The temple is one of the oldest monuments in the town. The small chapel was built to offer worship to sailors.

The Rectory in Cudillero is a building with a rectangular floor plan, made of masonry with stone finishes. The construction, formed by two floors, has undergone several renovations to suit its various uses. From its exterior stand out the decoration elements of its cornice, such as triglyphs and metopes.

Today the building accommodates The House of Culture and a museum. In the museum, a collection of sculptures, gold working and sacred ornaments are all exhibited. 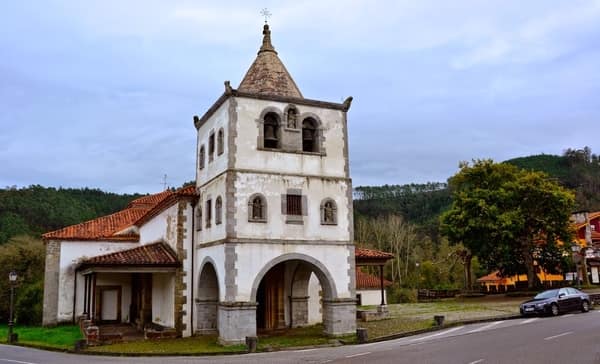 The Church of San Martín de Luiña is a coastal temple in Cudillero, considered one of the best in Asturias. The church has a high architectural value and inside it guards valuable works.

Its structure stands on a rectangular Latin cross plan and consists of three naves. Inside, it features cross vaults and houses a single chapel.

Attention is drawn to the inscriptions on the floor of the temple, which were used to mark the entrance to the nomadic drovers, an Asturian ethnic group that was dedicated to livestock and that in many places of Cantabria, were discriminated against.

St. Peter's Church is located in the village of Cudillero. It is a 16th-century temple, formed by a single nave, with two side chapels, cross vaults and a semi-circular apse.

Inside, the church, valuable carvings, such as the Crucified Christ, from the 17th century, and that of St. Francis of Assisi, dating from the 17th and 18th centuries are conserved.

Quinta de Selgas is located in Pito and was built between 1880 and 1895, at the decision of the brothers Ezequiel de Selgas Albuerne and Fortunato de Selgas. The complex consists of a collection of buildings and excellent gardens.

The palace has a rectangular floor plan and consists of two floors, attic and a semi-basement. The two main floors house the living rooms, the dining room, the master bedrooms and the office. The upper floor was intended for domestic service units.

The central structure of the palace is divided by a central body that features three opening spans open to balconies and topped with curved pediments. The main and rear façades are built on a large access staircase.

On the sides of the rear façade, two pavilions stand: The Pavilion of Tapestry and the Guest Pavilion.

The Tapestry Pavilion, located on one floor, has a main façade formed by five bodies. In the three central bodies, spans are framed by pilasters. The Guest Pavilion mimics the palace's design.

The outside of the construction expands on both sides of the road. It is home to the Selgas Schools, the family pantheon of Jesus of Nazarene and the Rectory, partially occupied by the Headquarters of the Civil Guard.

Soto de Luiña is a small village, with less than 500 inhabitants, close to the coast. The village is located in a pleasant environment, full of nature, and surrounded by small mountains. In the town, you can visit the Molino de Goro and the Church of Santa Maria.

Molino de Goro is located in the center of the village of Soto de Luiña, on the banks of the River Esqueiro. The construction is more than 400 years old. Its date of construction is not exactly known, as little documentation is available, but it is estimated that the mill was built around the year 1580.

The Church of Santa María de Soto de Luiña stands on a former pilgrim’s hospital, which was annexed to the parish church from the 18th century. Its structure consists of three naves and a cross with a semi-circular apse. At the back of the temple stands a bell tower, adorned with grey stone.

Inside stand out five altarpieces, built between the 17th and 18th centuries, among which the altarpiece of José Bernardo de la Meana stands out.