After yesterday’s replenishing afternoon, where we could enjoy the curative waters of Caldas de Reis, we now arrive at the penultimate stage of the Camino Portugues. The emotions intensify and the pilgrim path gives us one of its last gifts: a very interesting stage with wonderful landscapes.

Let's Continue on the Portuguese Way!

Today we face a stage full of charming villages and bucolic forested sections. During today's stage, we say goodbye to Pontevedra and we enter A Coruña, to finish the tour in the famous town of Padrón, known both for its peppers and for its important cultural interest.

Short route (18,6 km), with moderate levels. Throughout the day again we have the national road N-550 as our faithful companion.

Practical tips for this section: Throughout this section, you will cross several urban centres where you'll find multiple services. Buen Camino! 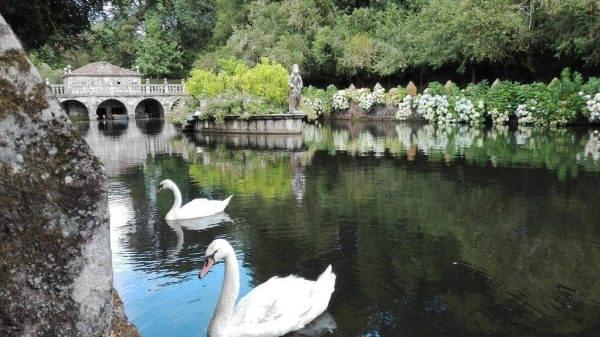 We start the day in Rúa San Roque, which leads us to a chapel that bears the same name. Next to it, we link with the national N-550 road and leave it 150 metres later by a track on the right.

On a quiet rural stretch, accompanied by the presence of the River Bermaña and some oaks and eucalyptus we reach the centre of Lavandeira (km. 1.5), which we leave on the right. The pilgrims' path continues in slight ascent, with some ramps, to the parish of Carracedo, at the foot of the national N-550 road.

Crossing the road, we accede to the Church of Santa Marina, located in the centre the urban nucleus (km. 5.5).

After the church, we go past several houses belonging to Gorgullón. After several crossroads, we descend to the junction of the N-550 road and we cross again at Casalderrique. At the stone marker 34.584 kilometres to Santiago de Compostela we say goodbye to the Concello of Caldas de Reis and we enter Valga.

By a track advancing parallel to the AP-9 motorway, the road passes by the centre of Casal de Eirigo, the Parish of Setecoros (km. 8.1). The path continues along the motorway, which we leave a little later by a paved road that leads us to the place of O Pino (km. 9.3).

Practical tips for this section: At the intersection of A Estrada, is the A Mesa da Pedra Bar and Restaurant, a hostel initiative devised by the Association of Friends of the Camino de Santiago. Traditional Galician food is served here and is paid by donation.  Buen Camino! 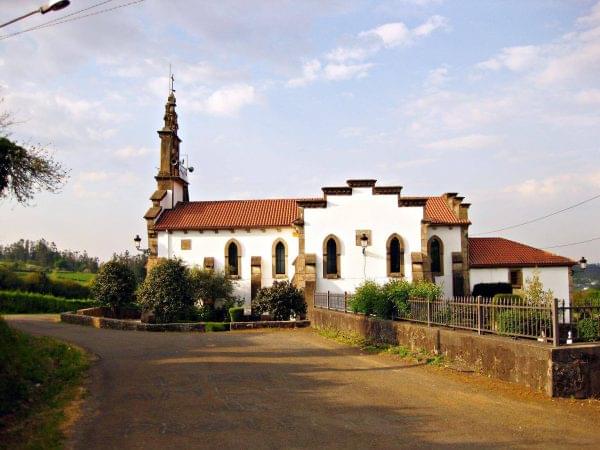 In this locality, we will find the 32.410  marker stone to Santiago, by this we turn to the right and we descend on a track that runs surrounded by the thick vegetation of Mount Albor, adapting to the course of the River Valga. After this beautiful stretch, we cross the river and enter San Miguel de Valga (km. 11.7).

Then we pass through the disjointed centres of Cimadevila and Fonte. In the latter we descend down a paved road that leads us to a track that empties into the Camino de Regadia, through which we cross the place of Condide, in the Council of Pontecesures (km. 14.3).

A kilometre later we find the neighbourhood of Infesta, where we cross the road that goes to A Estrada (km. 15.3). The pilgrims' path continues ahead to the Church of San Julián. We pass by the diversion of the Pilgrims Hostel in Herba (km 16) and just after we go over a level crossing, to continue to the bridge over River Ulla, in Pontecesures. 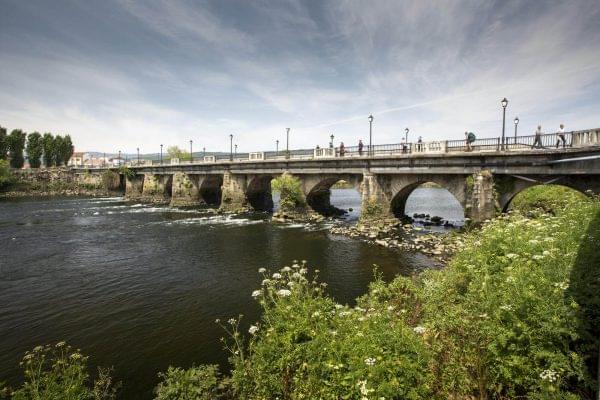 Practical tips for this section: In this section, we leave Pontevedra to enter A Coruña. Buen Camino!

We Cross the bridge, we say goodbye to the province of Pontevedra and we enter A Coruña. By the Padrón Bridge, we cross the River Sar and face a long straight that runs parallel to the river.

Following the straight, we pass by the Mercado de Abastos and the Paseo Espolon in Padrón, where we find a monument to Camilo José Cela and, at the other extreme, a statue of Rosalía de Castro and the Church of Santiago.

Next to the church, we turn to cross the river and climb Mount Carmen, passing by the convent of the same name. The stage finishes here today, we are in the town centre of Padrón. 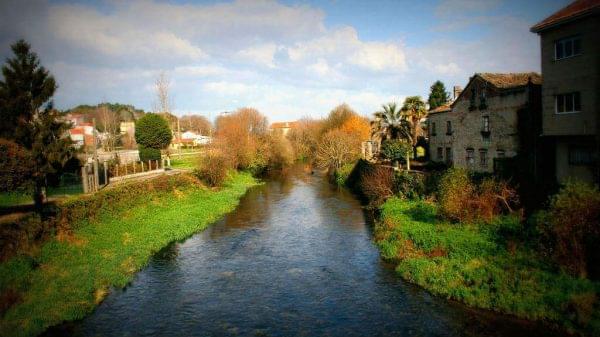 Practical tips for this section: You can take the afternoon to visit Iria Flavia one kilometre from Padrón, but tomorrow morning we will pass by. See you tomorrow!

Padrón is a locality with great cultural interest, both for its relationship with the Camino de Santiago and for being the locality of two famous writers, Camilo José Cela and Rosalía de Castro. In addition, the city is known for its famous peppers.

Those pilgrims who wish to arrive tomorrow for the pilgrim's mass in the Cathedral of Santiago de Compostela (at 12 noon) and who do not want to get up early, can lengthen today's stage until reaching Xunta O Faramello, which would imply travelling 28 kilometres today.

If, like us, you decide to finish stage in Padrón, you can take advantage of the afternoon to visit the Convent of Carmen, the Church of Santiago or the House Museum of Rosalía de Castro. And if you still have energy, you can go to the Chapel of Santiaguiño do Monte, the Collegiate Church of Iria Flavia and the Camilo José Cela Foundation, located on the outskirts of the town. 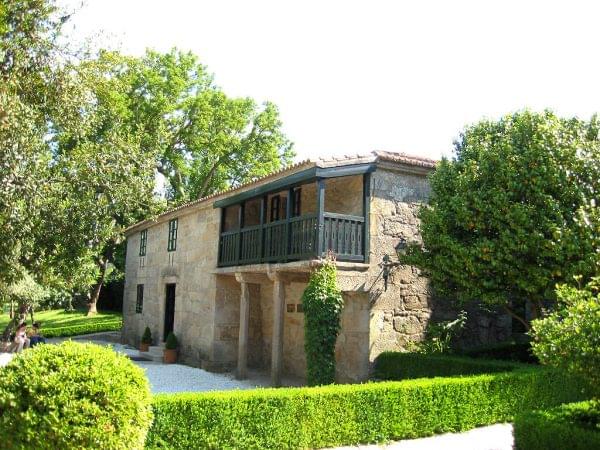 If you arrive in Padrón on Sunday, you should know that in the village, outside the Mercado de Abastos, one of the most dynamic markets in A Coruña takes place. In it, you can find local producers of empanadas, sausages, cheeses, etc.

Here are some tips to complete the penultimate stage of the Camino Portugues and we make some culinary recommendations for you to enjoy the cuisine of A Coruña, a province in which we will go through during the day.

The penultimate stage of the Camino Portugues does not imply any difficulty. The route is short, without too many climbs, so it can be completed without much difficulty both by walking pilgrims and by those who go by bicycle.

During today's stage, Padrón peppers cannot be missed. It would be a crime to visit the locality and not try them. Although they are known as Padrón peppers, they actually originate in Herbon.

This vegetable was imported from Mexico by Franciscan monks at the end of the 16th century.

Padrón peppers are served fried with sea salt. What characterizes these peppers is that some are hot and spicy and others not so that tasting them can always give you a surprise, and a few tears either with the heat or laughter.

Other typical products of the region are the local soft cheese and the regional apples.

What to do Caldas de Reis - Padrón

The Spur of Padrón walk makes up a beautiful walk on which we can find two emblematic sculptures: that of Rosalía de Castro and that of Camilo José Cela. The first one faces north and was carried out in the middle of the 20th century by José María Mateos. The other one to the south.

The space houses more than three hundred types of plants. It is also worth noting that a large market is held every Sunday in the park where you can find various regional products. 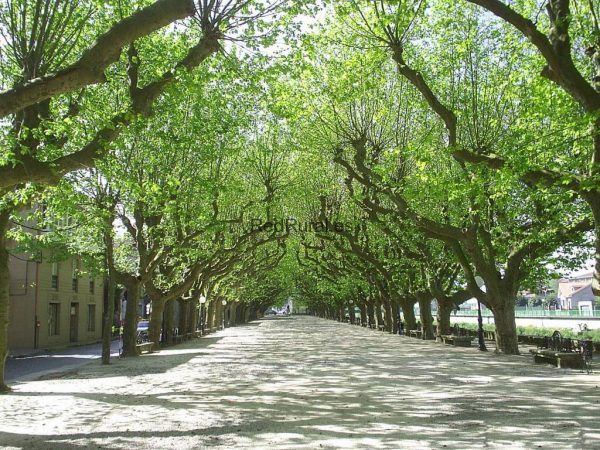 The Convento del Carmen is located at the entrance of the town of Padrón. The construction, in neoclassical Galician style, dates from the 18th century and was made thanks to a donation made by Alonso de la Peña and Montenegro. At first, the convent was occupied by the Order of the Barefoot Carmelites and later passed into the hands of the Dominican Order.

Visiting Hours: Before and after Mass.

The Casa Rosalía de Castro is located in the town of Padrón. It was in this place that the famous poet and writer Rosalía de Castro died, in the year 1885. In the 1970s, it was decided to restore the space and consecrate it to the cult of such a famous personality.

In its facilities you can visit several rooms that recall the life of the writer, in which you can see various documents and personal objects. The Centre of Rosalian Studies is located next to the house.

The Church of Santiago in Padrón is a temple of neoclassical style. The Church has a Gothic tribune that houses an image of Santiago the Pilgrim from the 15th century.

One of the most outstanding elements of this temple is the Pedrón, located under the main altar. It is a block of granite that, according to the legend, was used to hold the boat that transported the remains of Santiago the Apostle to Galicia. 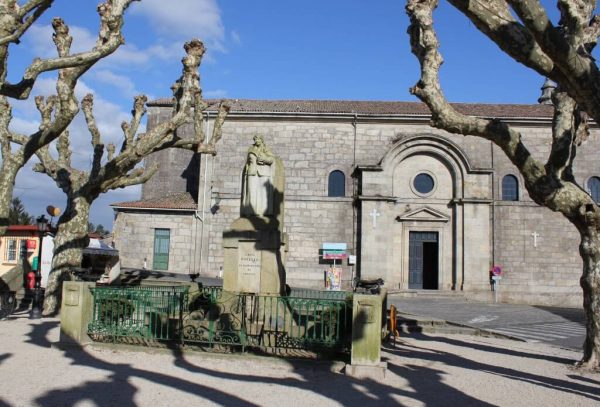 The Chapel of Santiaguiño do Monte is located on the outskirts of Padrón, on the slopes of Mount San Gregorio. The temple dates from the 15th century and was built on the orders of Archbishop Rodrigo de Luna.

Throughout history it has undergone several reforms, in which elements have been added and the temple has been extended. This Is why the main façade of the tower and the atrium are much more recent, from the 19th century. The chapel houses the Gothic tomb of San Gregorio, a hermit who gave his life to take care of the building.

The Camilo José Cela Foundation is located along with its house museum, opposite the Collegiate Church of Iria Flavia. In its dependencies, we can recall the history of the famous writer through numerous personal objects. In this place, you can also visit a small railway museum, donated by the writer's grandfather. 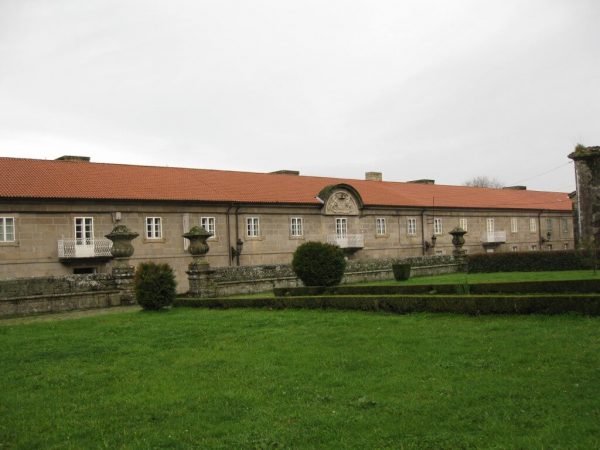 The Collegiate Church of Iria Flavia is located one kilometre from the town of Padrón. It Is considered as one of the first Catholic churches in the world to worship the Virgin Mary. Inside it houses the graves of Rosalía de Castro and Camilo José Cela, in addition to the remains of twenty-eight bishops. 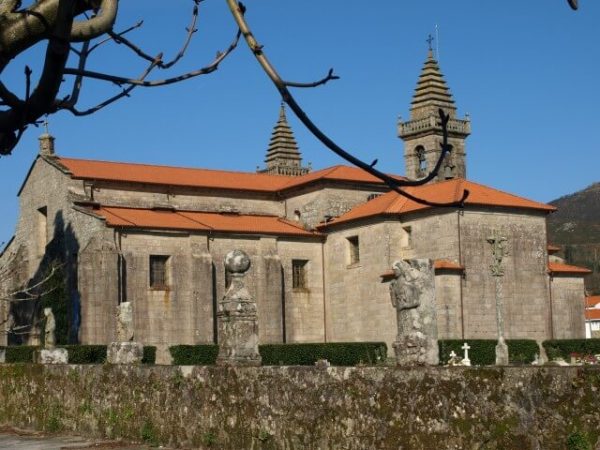